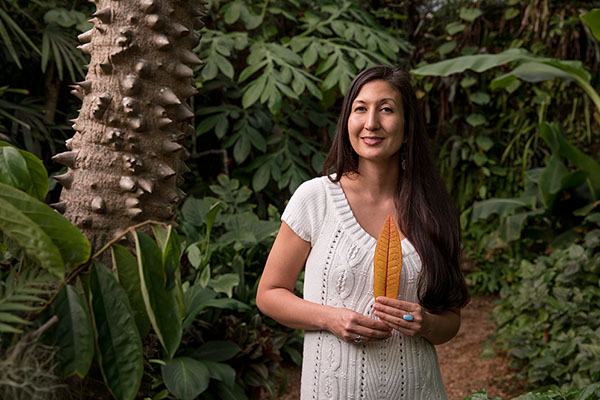 Small-scale fisheries supply over half of the world’s wild-caught seafood, providing food and employment for millions.

In response to recent international fish stock declines, thousands of marine protected areas have been created around the globe.

In Brazil, a type of co-managed marine protected areas called Marine Extractive Reserves (MERs) represents one of the most significant measures taken by the Brazilian federal government to protect the common pool resources of small-scale fisheries.

A doctoral candidate in the Anthropology and Integrative Conservation (ICON) program advised by Dr. Don Nelson, Emily Horton investigates the performance of MERs and their ability to achieve their objective of ensuring sustainable natural resource use and safeguarding the livelihood and culture of traditional populations.

“Research has illuminated discontinuities between MER objectives, federal legislation, and localized socioecological dynamics,” she explains. “This suggests an opportunity for improved multi-actor governance.”

From 2016 to 2017, Horton carried out fieldwork with support from the Fulbright U.S. Scholar Program, local fishing communities, her host University Universidade Estadual do Maranhão (UEMA), the Brazilian conservation agency ICMBio, and a crowd-funded Kickstarter grant.

Horton’s research focuses on a federal seasonal fishing ban targeting a practice known as zangaria, in which netting is hung on wooden poles parallel to the beach during high tide. Fish are caught in the netting as the tide recedes, at which point the catch is harvested.

The government ban on zangaria fishing – which lasts three months depending on the region – is centered on the idea that, while the nets target shrimp, they also capture fish and other non-target and juvenile species.

However, Horton’s research shows that the caught fish is heavily used for food and income by local communities. She has also found that the ban corresponds with peak shrimp harvest season and is particularly detrimental to the fishermen’s shrimp-dependent income.

Additionally, one of the fish species that the ban presumably aims to protect is reported to appear in large quantities prior to the ban period.

“While many local residents in fishing communities support a resting period for organisms, many disagree with the current timing of the ban and propose to either shift the period or shorten it,” Horton explains.

“Locals also request that they be provided some sort of governmental support or compensation for their livelihood losses, especially considering the current ban duration.”

Horton’s research aims to shed light on some of these socioecological dynamics by drawing from the social sciences, natural sciences (fish sampling) and visual arts (photography).

“I also ask how the ban period aligns with the ecological patterns of species identified as important by governmental and local actors.”

This can provide insight into what species the ban might be protecting as well as what species, identified as important for local actors’ well-being, are inaccessible (legally) during the ban.

As a result of her collaboration with the federal agency overseeing the reserve (ICMBio), preliminary findings are being used to inform national-level discussions on the zangaria ban.

“As I prepare for 2019 graduation, I am seeking positions that allow me to collaborate with diverse stakeholders to creatively address pressing socioenvironmental challenges through interdisciplinary research, policy, outreach, and education.”

“I’m open to work in the academic, nonprofit, and government sectors; the important deciding factor is finding a ‘good’ institutional fit where my skills and gifts are valued and could be of most service to people and the environment.”