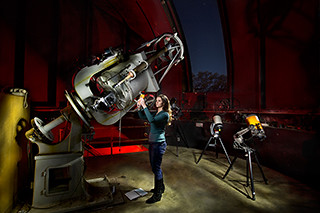 A doctoral candidate in Physics, Renata Cumbee works on improving our understanding of X-ray radiation produced within our galaxy under the direction of her advisor, Dr. Phillip Stancil.

“Our knowledge of the universe outside of our own atmosphere comes to us in the form of radiation (or light),” she explains. “This radiation is produced by various astrophysical sources over a wide range of wavelengths, from radio to gamma rays.”

However, our understanding of the radiation is limited, not fully understood by even astronomers and astrophysicists. That’s why Cumbee’s research is so important.

Cumbee’s research specifically studies supernova remnants (the structure resulting from a star exploding at the end of its life cycle) and the changes they make as they travel through the material that fills the space between the stars (also known as the interstellar medium).

“By studying supernova remnants, we are better able to understand one of the processes that propelled gas and dust into the interstellar medium and formed structures in our local region of space, such as our solar system,” Cumbee says.

In previous studies, astrophysicists were unable to model the spectrum, or range of energies and intensities of the x-rays produced along the edge of the Cygnus Loop.

They suggest that a process known to occur in the presence of high velocity ions and neutral atoms, such as in the case of the Cygnus Loop, called Charge Exchange (CX) may contribute to a significant portion of the X-rays we observe in such regions.

In the process of charge exchanges, a highly charged ion collides with a neutral target atom, and an electron is transferred from the neutral atom to the ion resulting in X-rays.

Cumbee’s primary research here at UGA includes calculating the spectra of X-rays produced after such a charge exchange collision and directly comparing them to experiments done by groups at other research institutes.

“Before we apply our calculations to models for astrophysical observations, such as the Cygnus Loop supernova remnant, we must verify that our theoretical approach is valid,” she explains.

Cumbee hopes her research will contribute to the knowledge and understanding of atomic collision processes and X-ray emission within our solar system and extended galaxies.

“This research has the potential to improve our knowledge of the temperatures of these regions and the velocities, abundances, and densities of the elements present,” she concludes. “This knowledge can enhance current and future models of various astrophysical environments such as supernova remnants, star forming galaxies, and even comets within our solar system.”

Cumbee plans to graduate within the year and is actively looking for postdoctoral positions and fellowships to continue working on the research she has initiated at UGA.

“Ultimately,” she says, “I would like to find a permanent position at a research university where I can continue my research in atomic collisions with applications in astrophysics.”