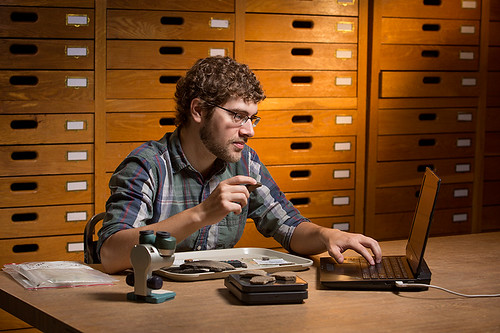 In the Late Prehistoric Period (circa A.D. 1000-1550) complex political systems, known as chiefdoms, developed, spread, and subsequently collapsed throughout the region we know as the modern day southeastern U.S.

Brandon Ritchison, a doctoral student in anthropology, studies the implications of these collapses and mass immigrations on neighboring chiefdoms under his advisor, Dr. Victor Thompson.

Characterized by ranked social and political hierarchy, agricultural production, and the development of pan-regional system of ideologies, the chiefdoms of the Late Prehistoric Period were also inherently unstable, each with a maximum life span of about 150 years.

This was exemplified by a series of chiefdoms along the Savannah River. Established around A.D. 1200, these chiefdoms collapsed by A.D. 1400, largely due to increased conflict and competition with neighbors as well as a series of periodic droughts.

After the collapse of the Savannah River chiefdoms, the area remained abandoned from around A.D. 1400 until around 1550, when Hernando de Soto’s entrada passed through the region, with members documenting it as being empty of people and settlements.

Ritchison’s research studies the impact of this abandonment on the Georgia Coast, where coastal sites that were previously connected socially or economically to the interior would have had to contend with a reorientation of these networks, along with a potentially massive influx of new residents.

He specifically focuses on the impact that regional scale sociopolitical collapses had on the social practices and organizational strategies of groups in neighboring regions.

To research this, Ritchison is currently excavating an archaeological site located at the Kenan Field on Sapelo Island, Georgia. Ritchison’s research suggests the community there would have likely received a large number of the immigrants from the Savannah River chiefdoms following their collapse and abandonment.

The Kenan Field site covers 150 acres and has been occupied almost continually since the first verifiable human settlement in the region 4,000 years ago.

Ritchison plans to examine the distributions of material artifacts there, such as ceramic sherds and shell refuse, in order to reconstruct the physical organization of the Kenan Field community both before and after the collapse of the Savannah River Chiefdoms.

Through this reconstruction of community organization, Ritchison hopes to show how systems of both political and interpersonal interactions changed within the community as the Georgia Coast region contended with a new geopolitical landscape and a multitude of new residents.

“While this research may seem highly specific to the archeology and history of a specific region, it taps into some deeper anthropological concerns.”

Using the past as a laboratory to understand how communities react to large-scale immigration due to political and environmental stresses has a greater applicability now than ever, as these kinds of instability increasingly contribute to massive population movements today.

Ritchison cites the Syrian refugee crisis as an example, along with projections suggesting that up to 13 million people in the US alone will be displaced due to sea level rise by 2100.

“While the globalized context of these issues today may limit the direct applicability of similar events played out in the past, I think that there are some timeless components of human social organization here, that if better understood, can serve to inform the decisions and courses of action for our future,” he explains.

After completing his Ph.D., Ritchison plans on pursuing an academic career in Anthropology and Archaeology. He hopes to be able to continue working closely with both students and the public to share the archaeology and history of the American Southeast.