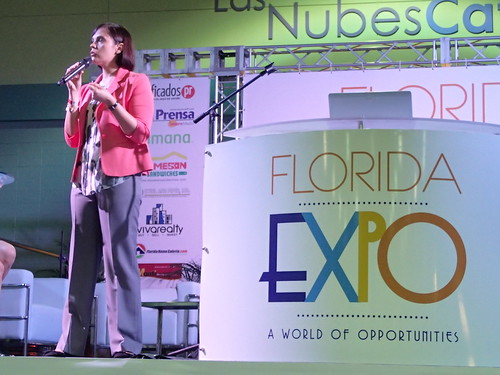 In 2015, around 1,000 Puerto Ricans relocated to the Central Florida region every ten days, making Florida home to the second largest concentration of U.S. mainland Puerto Ricans.

Perhaps even more shocking, estimates indicate that the number of Puerto Ricans in Florida will overtake New York later this year.

Many factors explain why Central Florida is the new Puerto Rican epicenter, including poor economic outlook in Puerto Rico, better employment opportunities in Central Florida due to tourism, and relatively affordable suburban living.

Cristalís Capielo, a doctoral candidate in the Department of Counseling and Human Development Services and a native of Puerto Rico, moved with her family to the mainland U.S. in 1998.

Capielo explains how, as an immigrant, she faced the challenge of simultaneously retaining aspects of her Puerto Rican culture and adopting aspects of the European American culture; something she describes as “living within two cultures.”

It is this experience that motivated her to research the process of acculturation across various Latina/o groups.

With her advisor, Dr. Edward A. Delgado-Romero, a national expert in Latina/o psychology and professor in the Department of Counseling and Human Development Services, Capielo compared four different acculturation models to understand better Latina/o acculturation in the U.S.

“Additionally, previous research tends to group Latina/os from different countries together, incorrectly assuming that we all acculturate the same way.”

Capielo’s research addresses both of these gaps.

Her findings indicate that whether a Puerto Rican immigrant retains or adopts aspects of the Puerto Rican and European American cultures, respectively, depends on the specific cultural factor.

“For instance, Capielo explains, “a Puerto Rican living in Orlando may learn English and, when asked, identify as American instead of Puerto Rican. However, this does not mean that this person is also willing to espouse European American values such as independence.”

Her research instead indicates that, Puerto Ricans to migrate to Central Florida may adopt U.S. cultural behaviors and ethnic identity, yet still prefer to retain Puerto Rican cultural values such as collectivism.

Capielo illustrates the importance of her research.

“Understanding how Puerto Ricans in Central Florida navigate two different cultures is a unique opportunity for psychologists to examine the development of an emerging cultural group.”

After graduation this August, Capielo will be an assistant professor at Arizona State University’s Counseling and Counseling Psychology Department, where she plans to continue her research.

“As an assistant professor at Arizona State University, I will continue a multicultural research program in three main areas: testing acculturation measurement models in other Latina/o communities and regions, measuring the trajectory and rate of change of acculturation, and examining how this may influence Latina/o health outcomes and choices.”