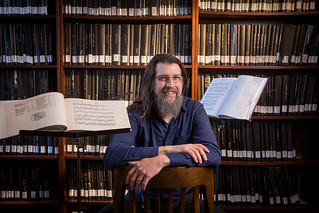 Communal singing is a universal form of communication and expression that all societies utilize. However, there has been little historical focus on the totality of meanings and community sensibilities that congregational singing generates.

James Owen, a doctoral student in the Department of History, seeks to locate and analyze hymn singing in the complex social and racial contexts of the late eighteenth and early nineteenth century Moravian missions in the Americas.

Under the direction of his advisor, Dr. Claudio Saunt, Owen’s multidisciplinary research includes narratives on the U.S., Caribbean, and Native American histories as well as in ethnomusicology, led by Dr. Jean Kidula, of the various hymns sung at the missions.

Owen explains how, when a new form of musical language is introduced, that “new” language is adopted, adapted, and transformed by the recipients to fit more readily into local ecologies of sound.

“Culturally specific frameworks for intonation, melodic interpretation, lyrical translation, and the intricate and expansive possibilities of human vocality all play a role,” he states.

Owen studies these processes that are exemplified by community creation at early Moravian missions where Christian theology was taught to illiterate African, creole, and Native American peoples through congregational singing.

The Moravians, a group of Czech of the Moravia region of the Czech Republic, established a centralized financial, social, and intellectual network for missionizing during the 1730s with routine and meticulous correspondence between missions.

The missions are all within the broad geographic area of the Moravian Southern Province in America that, until the late Nineteenth century, spanned from North Carolina to Surinam.

“In each of these communities some of the same Holy Spirit hymns were translated into local languages with nuanced, and sometimes startling, distinctions in theological interpretation,” Owen explains.

At each mission Moravian singing theology and the creation of appropriately sacred spaces were central to the coherence of the ethnically and racially diverse communities.

“The experience of singing as a community allowed a variety of spiritual and religious perspectives to coalesce into each community’s distinctive ecology of sound. The communal singing experience also motivated the construction of particular kinds of spaces for communal singing.

Some of the questions Owen plans to explore include researching why these people sang together, what the frequent experience of congregational singing meant to community members, and how the creation of spaces for singing promoted community coherence.

Aside from the narrative body of the dissertation, Owen’s research also includes categorizing hymns by title, author/composer, scriptural references, the date of composition for lyrics and tunes, the European, Native American, and creole languages, names and dates of translators, the various hymnals in which each is published, and missions where the hymn is known to have been sung.

Owen plans to use this information to create an ArcGIS map showing the movement of selected hymns over time from their sources in Europe to missions in the Caribbean and North America.

Owen also plans to feature several of the hymns in a set of recordings using instrumental and vocal renditions by a contemporary community of musicians and performers.

“While these recordings will be historically based, the intent is to include more experimental, electronic, and loop based arrangements that bring together a diverse cast of artists and their own spiritual traditions.”

When asked what he hoped to accomplish with his research, Owen stressed that his basic plan for graduate school was to link his loves of music and performance, architecture and sustainable development, and historical research and writing.

“I have begun to demonstrate historically something that musicians and performers already know- music, especially within a community of musicians, does great things to the human brain, the ineffable human spirit.”

After graduation, Owen plans to seek out a university job, ideally an interdisciplinary position.

“I have developed a range of professional skills in history and indigenous studies, as well as musicology. Wherever I end up, I plan to be an advocate for interdisciplinarity and a community voice for the humanities and performing arts.”