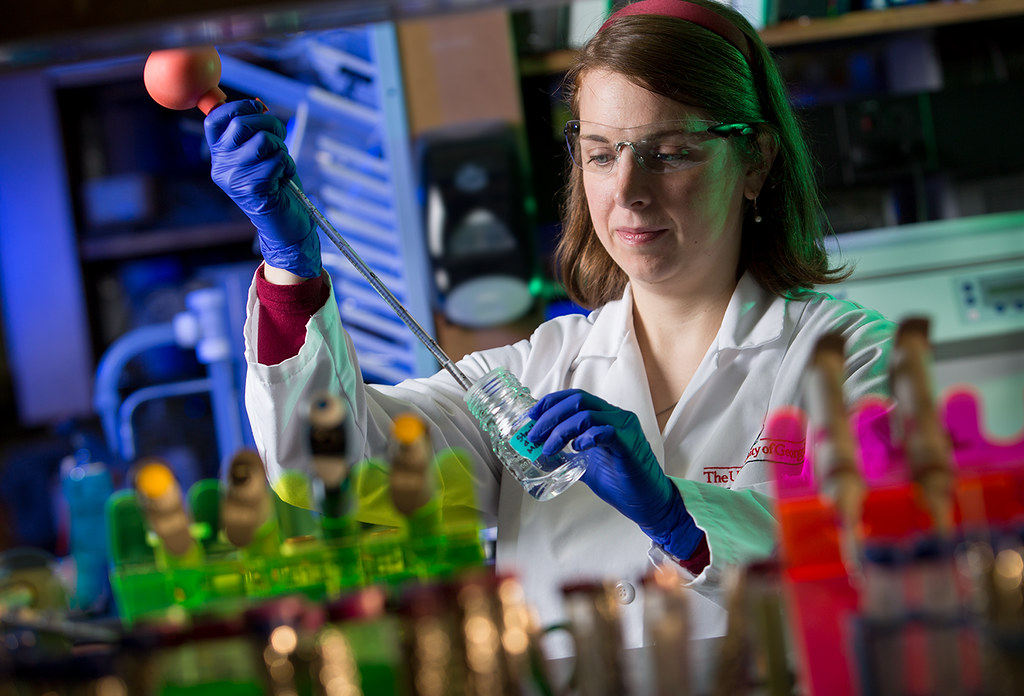 Proteins, Hanold explains, are basically molecular machines that carry out a variety of tasks within the cell, whether it is making molecules that build and maintain cells, receiving and transmitting signals (or messages) through the cell, or acting as a scaffold that ensures the necessary components are in the right place at the right time to function normally.

Hanold is interested in a protein called the epidermal growth factor receptor (EGFR), which is important in processes such as growth, migration, and cell survival. However, an abnormal increase in the number of signals produced by EGFR can contribute to cancer.

“If we piece together how certain proteins within the cell work together to carry out a particular process, we can better understand how the dysfunction of these proteins contributes to various disease states,” Hanold says.

This is where Hanold’s research comes in.

Under the direction of her advisor, Dr. Eileen Kennedy, Hanold uses chemistry to develop tools to better understand the biology of the cell, especially how specific proteins within the cell work together to carry out a variety of tasks.

“We are developing molecular tools that can disrupt specific proteins within the cell. We are especially interested in how the interactions between proteins contribute to their function and signaling within the cell.”

Studying these interactions is crucial to understanding further the roles of proteins within the cell.

“Some of these interactions can act as switches, turning a protein on or off. So if we can block the interaction between specific proteins, we can disrupt their function and signaling and study the effects that this has on the cells.”

Already, Hanold’s work has made a significant contribution to EGFR protein interaction research.

“Studies have shown that two EGFR proteins interact with each other to produce the transmitted signal. Using this information, I have designed a molecular tool to block this interaction between the two EGFR proteins, which prevents the signal from being produced.”

Hanold explains how this tool would not only allow researchers to block the signaling of EGFR and study its effect on cellular processes, but it would also allow for a better understanding of the role of the interaction itself in regulating the EGFR signaling pathway.

“If these disruptive tools are effective at blocking signaling, they may also have potential as anti-cancer therapeutics, thus slowing the growth of EGFR-driven cancers,” she explains.

After graduation, Hanold plans to pursue a career in academia. Ultimately, she would like to continue her research in chemical biology and work toward developing molecular probes and potential therapeutic candidates.

“I became interested in this career path as an undergrad because of my experience as a researcher and a tutor. Even during my graduate studies, I enjoyed the combination of mentoring undergraduates while also conducting research.”