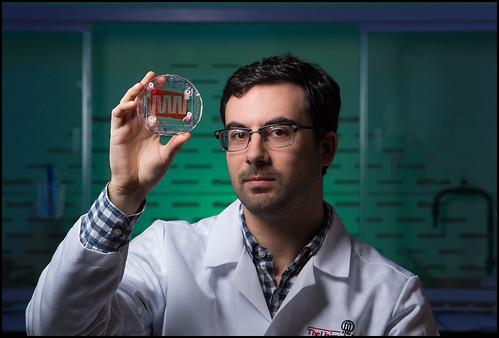 The Center for Disease Control and Prevention estimates that lung disease afflicts more than 235 million people worldwide and kills over 3 million people annually.

In the United States, more than 25 million Americans are living with chronic lung disease, which is currently the only major disease with an increasing death rate.

Marcus Goudie, a doctoral student in the College of Engineering, hopes his research one day will help improve patient care and outcomes in those fighting chronic lung disease.

“We hope to provide a means for long-term lung support, as well as an effective solution for patients waiting for lung transplants,” Goudie says.

This is especially imperative because up to 11 percent of patients may die while waiting for a transplant, and while there are options for short-term support, these technologies require teams of doctors to operate and force the patient to be hospitalized.

“Through our lung support, patients can continue with their normal lives while waiting for transplants,” he explains.

Under the guidance of his advisor, Dr. Hitesh Handa, Goudie is currently working to design microfluidic artificial lungs that are more efficient than other artificial lung technologies and highly similar to their natural counterparts.

Goudie is designing artificial lungs so analogous to human lungs, in fact, that the blood flow paths closely mimic the natural vasculature systems found in human lungs. This similarity allows the blood cells to experience similar pressures, stresses, and flow velocities as those in the human lungs.

However, one major hurdle remains before Goudie’s microfluidic artificial lungs will be ready for clinical use.

Goudie explains that when blood comes into contact with foreign surfaces (such as artificial lungs) platelets adhere to the surface, forming a thrombus (or blood clot) within hours.

Complications due to thrombosis and infection can result in extended hospital stays, increased healthcare costs, and even patient death.

“We see clotting in larger devices such as catheters (over ¼ of an inch in diameter), so when we are working with blood flowing in channels much smaller than the size of a human hair, clotting can happen very quickly,” Goudie emphasizes.

With this in mind, Goudie is not only developing and designing microfluidic artificial lungs, but is also working on biocompatible coatings to improve the blood compatibility and antimicrobial activity of blood-contacting devices.

Without these biocompatible coatings, the microchannels in artificial lungs have been shown to clot in less than one hour of use.

Together with Dr. Handa and Dr. Joseph Potkay at the Veteran’s Affairs Hospital in Ann Arbor, Michigan, Goudie is working to increase the blood compatibility of these devices through the use of biocompatible coatings in order to bring this technology closer to clinical use.

“The novel materials we’re developing could lead to significant improvements in many different medical devices by reducing complications related to implants,” Goudie explains.

Goudie is also working with researchers in the University of Georgia School of Veterinary Medicine to evaluate these novel coatings in animal models.

These biocompatible coatings not only could decrease the morbidity and mortality percentages associated with such implantable medical devices, but also may reduce the patient’s costs by shortening hospital stays.

Even before beginning his research at the University of Georgia, Goudie has worked on a number of medical device projects including polymer processing and designing artificial lungs, peristaltic pumps, and blood warming units for pediatric and neonatal applications.

“My background in microfluidics and medical device design has led me to become passionate about designing microfluidic devices for artificial lungs, and I am excited to develop microfluidic platforms to create novel solutions for a variety of biomedical applications,” he says.

After graduation, Goudie would like to study at Harvard’s Wyss Institute for a post-doctoral fellowship, after which he plans to become a professor in either chemical or biomedical engineering.