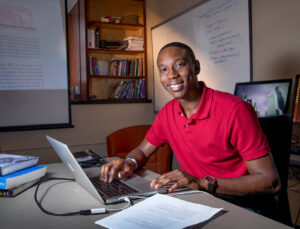 Yes, you read that correctly!

RNA is a biological molecule essential for all living beings. More specifically, RNA utilizes the genetic information stored in DNA to create proteins.

Under the supervision of his advisor Dr. Liming Cai, Hill is working on ways to model these RNA strands using “formal language theory.”

The theory consists of studying the syntactical structure of a language- only in this case the language is RNA.

RNA can be thought of as a language whose alphabet is made up of the nitrogen bases- adenine, cytosine, guanine, and uracil.

Just like any other language, the RNA language is defined by specific grammar rules. Adenine and uracil correspond to each other, as do cytosine and guanine.

Hill’s research consists of creating algorithms that efficiently infer the probabilistic nature of these rules.

“By learning the probabilities of each grammar rule, we can determine what the structure of an RNA sequence most likely looks like and graph it,” Hill elaborates.

“Accurately modeling RNA is significant because it allows biologists to fully understand the relationships present at the molecule level. They can then attempt to recreate such a molecule or even create a new one.”

Currently, Hill is in the early stages of creating algorithms that efficiently infer the probabilistic nature of the production rules, revealing secondary and tertiary structures in the RNA sequence.

Although much of his algorithmic research has been inspired by RNA, he’s quick to point out that isn’t his motivation behind his research.

“My inspiration comes from the realization that advancements of any form in computer science can have widespread effects in many other domains of life.”

Hill cites both computer security and speech recognition as fields where advancements in formal grammars can be put to use.

“Both of those sub-fields have led to countless improvements on the average person’s quality of life. By extension, I hope the algorithm design work I do may improve lives one day.”

After graduation, Hill plans to pursue an academic career.