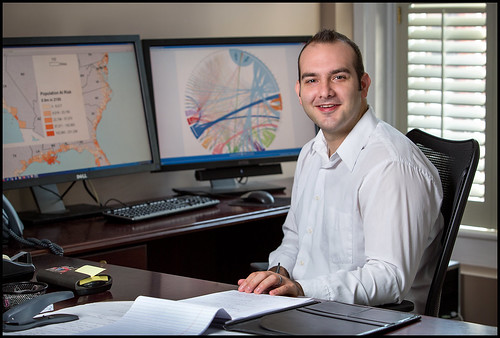 Sea levels are expected to rise by as much as six feet by the year 2100, a prediction that, if accurate, will significantly impact the nearly 40 percent of Americans who currently live in a coastal community.

The mass migration of these Americans to higher ground over the next century has the potential to affect almost every U.S. community- many of which are unprepared to accommodate such a large, sudden wave of new residents.

Mathew Hauer, a doctoral candidate in Geography under the direction of Dr. Steve Holloway, examines the rise in sea levels and projects how a migration away from rising coastal waters could reshape the population landscape in the United States.

“My study specifically focuses on the number of people currently living in coastal communities who might be impacted by sea level rise and where they might go if we don’t deploy coastal protection,” Hauer explains.

Coastal protection could come in many forms.

“Coastal communities have a wealth of adaptation options to address sea level rise, Hauer says. “Sea Walls can be built, roads can be raised, pumps can be deployed, and so on.”

These adaptation strategies, however, rely on accurate information about these locations, time scales, and populations at risk.

That is where Hauer’s research, which includes additional factors not accounted for in other models, is creating waves of its own with its findings.

Hauer’s dissertation research combines U.S. Census data, population projections, IRS migration data, and highly detailed sea level rise inundation mapping to give a clearer indication of the areas that future sea levels will cover and where those who might be displaced may resettle.

“For instance,” Hauer explains, “my research suggests that a sea level rise of six feet by 2100 could displace 13 million American primarily located in the U.S. Southeast- a number that is double previous estimates.”

With this in mind, what does Hauer recommend to keep such a large amount of the U.S. population from being displaced?

“I recommend that coastal communities begin the process of either deploying critical protective infrastructure or planning for a ‘retreat from the beach.’”

He stresses that growth management strategies could also be implemented to prevent rapid population increases in the most threatened areas.

Additionally, he recognizes the need for models to include future residents who may move away from coastal communities to escape extreme climate change in their own geographic region.

Ultimately, Hauer concludes, identifying the number, locations, and potential future destinations of those who could be displaced by sea level rise is critical for planning efforts.

“By planning for future sea level rise, we can shape future coastal developments over the coming century. Doing this will ensure that we can still enjoy our amenity rich coastlines while reducing risk to catastrophic storm surges and inundation from sea level rise.”

After graduation, Hauer plans to continue working as a faculty member with the Office of the Vice President for Public Service and Outreach.