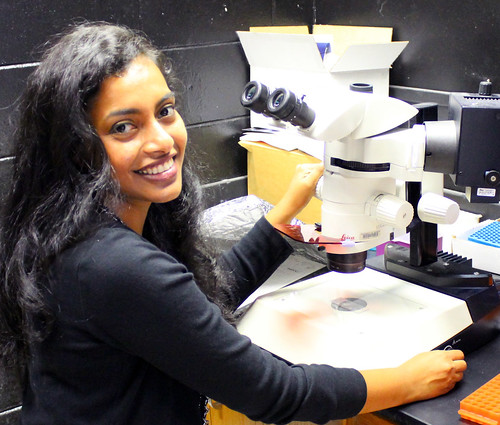 Snehal Chaudhari, a doctoral student in cellular biology under the direction of Dr. Edward Kipreos, researches the connection between mitochondrial fusion and longevity.

Using a small nematode (C. elegans) as a model, Chaudhari’s study began as a way to understand further the importance of mitochondrial fusion in maintaining cellular function.

Mitochondria are dynamic subcellular organelles with the ability to combine (fusion) and divide (fission) to provide a multitude of metabolic functions, including energy production.

However, it was the unintended results that were most impressive.

“Interestingly, we found that a daily exercise regimen in C. elegans increased their mean lifespans by 60 percent– this is the equivalent to humans living an average of 114 years!”

This major finding provides more details on how exercise can slow aging and allow organisms to have healthier, longer lives.

“This is the first demonstration in any organism that mitochondrial fusion upon exercise can increase lifespan.”

Further research into the phenomenon led to the discovery that many C. elegans mutants that have longer lifespans also have increased mitochondrial fusion.

In addition to her major research project on mitochondria fusion in C. elegans, Chaudhari’s dissertation research has discovered a new role for B-complex vitamins in promoting stem cell proliferation.

Chaudhari explains that C. elegans utilize folates in a new way to control the division of stem cells the produce eggs.

“Our research showed a striking result: that folates signal to the stem cells independently of their role as vitamins.”

This is the first demonstration in any animal that folates act as a signal to help germ stem cells divide.

“In a broader context, our work demonstrates the presence of a binary decision regulated by three signaling molecules (folates, insulin, and defachronic acid) that switches between lifespan extension and germ cell proliferation,” she says.

After graduation, Chaudhari plans to take a post-doctoral position at a research institute.

“My aim is to carry on further research in the field of cell biology.”

“My career goal is to continue research in an academic setting and follow in the footsteps of my mentor, Dr. Edward Kipreos, who has made significant scientific discoveries throughout his career. Like him, I would like to continue to research, educate, and train young students in science simultaneously.”