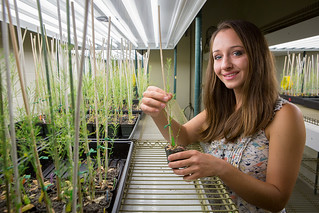 A doctoral candidate in Genetics, Caitlin Conn’s research on parasitic weeds (known as broomrapes), recently published in Science magazine,  will help control the infestation of these parasitic weeds and aid in understanding how parasitic plants become virulent agricultural weeds.

Broomrapes (of the Orobanchaceae family) are herbs or shrubs native to temperate Eurasia, North America, South America, and parts of Australia, New Zealand, and tropical Africa. Most of the plants within this family are either fully or partially parasitic, living on the roots of host plants.  Some are considered weeds.

In a healthy crop, a host plant uses hormones (called strigolactones) to form a symbiotic relationship with beneficial fungi in the soil. This harmonious relationship provides nutrients- especially phosphorous- for the plant and carbon for the fungus.

However, to the parasitic broomrape seeds, these hormones indicate that a potential host plant is nearby. The broomrapes germinate in response to the hormones, then attach to and begin damaging the host plant before ever emerging through the soil surface.

These parasitic weeds are often generalists and can threaten a diversity of host plants that produce structurally variant strigolactone hormones.

“I began by looking for proteins that we know have a role in non-parasite seed germination,” she explains. “I addressed questions about the evolutionary history and the function of these proteins in parasites.”

At this point in her research, she has investigated the hypothesis that some of these proteins might be strigolactone receptors in parasites. To do this, she has used computational tools and genetically modified non-parasites to analyze the proteins in parasites and their non-parasitic relatives.

Next, Conn plans to investigate whether strigolactone perception and signaling contributes to the parasite’s vast host range.

Conn is hopeful her work will lead to a more effective weed control strategy. Currently farmers usually fight the parasites after they become visible above ground.

“I chose my research area for several reasons. The opportunity to join the fight against a major threat to food security is the biggest one. I sincerely hope that my research can contribute to a solution.”

If Conn is successful, her research will contribute to a greater understanding of how parasites recognize their host and germinate in response.

“This knowledge could lead to the development of more effective control strategies, which are desperately needed in different parts of the world,” she explains.

“I love my project because it involves evolutionary and molecular genetics. There is traditionally a gap between those two fields (at least in a lot of people’s minds), but the Department of Genetics does a fantastic job of integrating both.”

After graduation, Conn plans to continue conducting researching and teaching in academia, with the goal of finding better ways to engage the public in the scientific process.

“My real passion is connecting the public with science,” says Conn. “Being a student here has made me realize how tremendously important science is in the decision-making process. Whether we’re shopping for groceries, deciding on transportation, or heading to the polls on Election Day, we need science in order to make informed choices.”

“I love research. It’s fundamental to science. So in my future career, I want to do research, as well as help the general public understand it.”