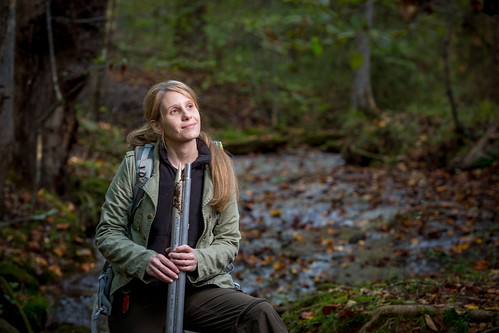 In the past few decades, bird refuges in places such as the Galapagos Islands have been deemed unfit for the reintroduction of critically endangered bird species due to disease spillover risk from free-ranging backyard poultry on or near the bird refuges.

Andrea Ayala, a recipient of the 2015 Ford Foundation Pre-Doctoral Fellowship award, hopes her research will make these spillover events less of an obstacle to reintroducing these critically endangered species in the future.

Ayala, a third year Ph.D. student in the College of Veterinary Medicine’s interdisciplinary Veterinary and Biomedical program, was first drawn to her research topic when the West Nile Virus outbreak spread to New York from the Middle East. The outbreak subsequently spread to California within four years, decimating large numbers of crows, ravens, and blue jays.

“This caught my attention as to how disease, especially novel diseases introduced due to human anthropogenic activities, may regulate avian populations. The intersecting links of infectious disease outbreaks, ecology, and human-induced landscape changes fascinated me.”

Once considered disjointed fields, Ayala explains that the agricultural-wildlife-human interface is now recognized as the vehicle by which emerging pathogens intensify in incidence and distribution.

“Of all the mechanisms linked to novel disease ‘emergence’, the co-mingling of species once separated by temporal and/or geographical barriers is one of the most fascinating yet least investigated processes.”

She specifically studies the Newcastle Disease virus, which causes an acute infectious viral fever in birds (especially poultry). The disease can also cause influenza-like symptoms in humans who have been in contact with the infected birds.

“While species associated with humans such as rock pigeons, European starlings, and house sparrows have been studied in terms of Newcastle disease virus transmission to Chickens, the reverse has been largely neglected. Moreover, the agro-wildlife interface is a habitat all its own, with many beloved species of songbirds whose susceptibility to Newcastle disease are largely unknown.

In the “real world,” testing the driving factors of disease outbreaks in wildlife are challenged by the fact that epidemics usually go unnoticed until significant mortality rates are reported.

At that point, disease ecologists must go back and try to piece together the evolutionary, molecular, ecological, behavioral, and environmental factors that served as the tipping point for a viral epidemic to begin.

For her dissertation, Ayala plans to track a safety-tested vaccine to model ecological pathogen transmission.

She will use economically feasible, netted coop enclosures readily available to underfunded communities, hypothesizing that backyard chicken flocks in plots without coop enclosures will have increased vaccine transmission events to wild birds, as opposed to flocks maintained in coop enclosures.

Ayala will measure the spillover rate from free-ranging vaccinated chickens by capturing, banding, and sampling wild birds for immune baseline data. By including small tracking devices in each band, she will be able to determine where contact transmission occurred, and which wild species are most vulnerable due to their natural history.

She plans to translate her data into a risk-assessment contact model for related birds whose home ranges overlap with high activities of village poultry farming.

“Performing a risk assessment model for transmission of viruses into these species, which can be extrapolated to vulnerable related species, can provide insight on how those relatives in marginalized nations may fare if in contact with a virulent strain of the virus.”

From there, different biosecurity measures can be tested, with the potential for developing cost-efficient housing of village chickens while maintaining buffer zones meant to break the chain of transmission to endangered species.

Since beginning her graduate work, Ayala has presented her preliminary findings on vaccine spillover, as well as an epidemiological model theorizing intra-specific transmission between house sparrows and chickens, at the Southern Conference of Avian Diseases in 2013 and 2014.

“In particular, I am interested in studying agriculturally associated ground foraging birds, such as sparrows, which might be the “missing link” in understanding how Newcastle disease virus can spread from farm to farm, as well as how susceptible and infectious sparrows are to this virus.”

After graduation, Ayala’s goal is to continue studying the ecology of Newcastle Disease virus in wild birds as the backyard poultry industry expands, as well as other agriculturally significant pathogens with the potential to spillover into wildlife.