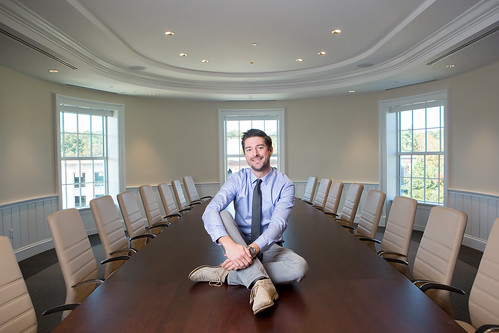 Nearly 3.5 percent of the world’s population, or 250 million individuals, live outside of their country of birth. With approximately 40 percent of these people migrating from developing to developed countries, they bring with them tremendous challenges and opportunities for the regions involved.

Thomas Lebesmuehlbacher, a doctoral candidate in economics, researches the development potential of migration and how this emigration from developing countries may foster a country’s growth prospects, specifically in regard to technology diffusion back to the home country.

A 2015 Graduate School Doctoral Research Fellowship recipient and native of Germany, research on migration and emigration is a topic close to his heart.

Lebesmuehlbacher ‘s dissertation research, under the direction of his advisor Dr. Santanu Chatterjee, examines the positive impact migration may have on the origin country by facilitating technology diffusion.

“Most countries do not innovate themselves, so they have to adopt technologies invented elsewhere,” he explains.

“Literature has focused extensively on several factors that facilitate technology diffusion from developed to developing counties, most commonly trade and foreign direct investment.”

In addition, migration has a huge potential to affect technology diffusion.

“When emigrants gain new knowledge abroad, it can be imported to the home country either through re-migration or information sharing within networks,” he clarifies. “Moreover, many migrants remit money back home to support their families and friends, or invest in their home economy.”

In contrast however, highly skilled emigration may also have detrimental effects on the economy of the home country.

Lebesmuehlbacher’s research examines to which extent migration, as well as foreign domestic investment (FDI) and trade, enhances technology diffusion, and whether these channels play different roles in developed and developing countries.

“My findings indicate that there are no large differences in the effect of FDI on technology diffusion in either developed and developing countries,” he states.

“It does not matter how skilled migrants are, but whether or not they migrate to one of the 34 countries that make up the Organisation for Economic Co-operation and Development (OECD),” he elaborates. The mission for the OECD is to promote policies that improve the economic and social well-being of people.

“Worldwide, countries spend large amounts of resources to attract foreign firms, based on the premise that FDI leads to technology transfer and subsequent productivity gains for domestic firms,” he explains. “However, such large subsidies can only be justified if FDI, or imports for that matter, generate substantial positive technology spillovers for domestic firms.”

“My research casts doubt on the potential of FDI to cause such externalities. Instead a country might benefit more from investing in the international exchange of human capital,” he suggests.

After graduation, Lebesmuehlbacher plans to continue his career in academia.

“I enjoy the balance between teaching and research. To me there is nothing better than shaping young minds and satisfying their, and my own, curiosity.”