Written by Jacob Smith, Graduate Assistant of the UGA Graduate School
Interview with Daniel Boches, doctoral candidate in the UGA Department of Sociology and 2022 recipient of the M. Terry and Elizabeth S. Coffey Graduate Fellowship 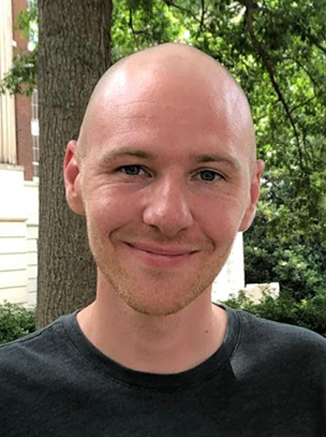 Have you ever noticed a mistake in the workplace and didn’t know what to do? Maybe a disagreement with another employee or a mishap occurred and you considered confronting the employee directly or discussing it with a superior. Daniel Boches uses social geometry to discover how situations like this in the healthcare industry are handled, and if they can be predicted.

Social geometry is a term many people may not be familiar with. It is essentially a way to observe what is going on in specific scenarios by looking at the aspects involved. Boches says that he is not looking at individual doctors or hospitals, but rather the cases. He asks who were involved and what are their sociological characteristics  Boches says, “The case is the unit of analysis.”

There are two characteristics that Boches is using when looking at these situations. The first is intimacy. Boches explains that intimacy is essentially the relationship between two peers. Research has shown that if a disagreement occurs between two people, a person is more likely to be understanding and forgiving if they have a close relationship with the other person involved.

This translates to the workplace as well. If a coworker is seen as a friend or of having a close relationship, the people involved are more likely to move past the incident. Boches says that if a close relationship exists, there is more than likely going to be an attempt at consolement. On the other hand, if the people involved do not have that close bond, it has been observed that they are quicker to report the incident or be more direct in the situation.

The second charasteric Boches looks at is status. Boches expresses that this is a vital aspect in his research and is the subject of his latest chapter in his dissertation that has recently been sent out for review. The status can be thought about as upward and downward cases.

Social Geometry Explained in this Research

Social geometry may be a difficult topic to understand, but Boches makes it simple. Speaking on the matter he says, “It has nothing to do with the personalities of the people involved, but you just change the sociological shape of the interaction, and the responses will change.” This allows for Boches and other researchers like him to predict how these situations will play out.

Boches says, “We can predict how people will behave just based on their outwardly observable characteristics.” This is a concept that can be helpful in healthcare work environments, but can also be made applicable in other environments. “ It is important to have the science before the policy,” he says. Boches wants others to test his ideas after they are published so they can see for themselves.

One idea for a policy Boches has is to use his research to protect the identities of workers. He says that during an M&M conference (Morbidity and Mortality), a randomly selected resident could present the information, thereby skewing the vertical direction and changing the interaction.

Who is Daniel Boches

Boches graduated from Temple University in Philadelphia with a bachelor’s in economics and a minor in sociology. He then continued his education at the University of New Hampshire (UNH) in 2016, completing his master’s.

One study Boches was interested in while at UNH was developing a theory that predicts when acts of violence would be labeled terrorism in the media. He utilized social geometry to observe how intimate the parties were, their status, race and ethnicity, and how that could be used to predict an outcome.

Boches has taught at Rider University in New Jersey where his passion for research met his love of teaching. Boches is currently enjoying Pennsylvania, but misses his favorite study spot, Walkers Pub and Coffee.

Daniel’s work can be found in Deviant Behavior and RSF: The Russell Sage Foundation Journal of the Social Sciences