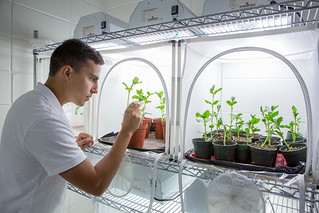 Microbes in insects (and other organisms) have the ability to shape ecosystems by mediating the interactions of hosts with their environment.

“Bacterial symbionts that protect insects from their natural enemies are being found more commonly, but we don’t yet have a full understanding of how widespread this phenomenon is. My findings may help us to understand the selective pressures that maintain biological diversity among key players in these interactions,” Martinez explains.

The pea aphid (Acyrthosiphon pisum) is a model for studying these types of interactions. Along with a nutritional symbiont required for their survival (Buchnera aphidicola), they can also carry infections with one or more of at least seven types of other ‘facultative,” non-essential bacteria that confer benefits under various conditions.

“One of these facultative bacteria, a defensive symbiont called Hamiltonella defensa, protects pea aphids against the parasitic wasp, Aphidius ervi, which lays eggs that develop inside living aphids. When a pea aphid is infected with Hamiltonella, it is able to overcome and kill wasps developing inside itself, allowing the aphid to survive and reproduce. This is a big deal when the alternative is almost certain death by mummification (an emptied aphid husk after it’s been consumed by the wasp),” Martinez explains.

“I found that parasitism lead to altered concentrations of Hamiltonella, potentially signifying the mobilization of defensive factors, and that developing wasps died at different times inside aphids, depending on the bacterial strains which differ in strength of protection,” Martinez reports.

He adds that during his research he found, by chance, that some pea aphids can maintain strong resistance to parasitism without the aid of symbiotic bacteria, which has added a new dimension to the aphid-microbe-wasp interaction.

Most recently, Martinez found that both of these resistance mechanisms (Hamiltonella infection and non-symbiotic), which are effective against one wasp species (Aphidius ervi) are completely ineffective against another common wasp species (Praon pequodorum) which was able to successfully develop in all aphids regardless of their defense.

“Insects sometimes maintain defenses that are targeted to specific natural enemies, but we did not expect such a high degree of specificity of both defenses against one wasp, but not the other.”

Martinez is optimistic his field of research will contribute to the understanding of insects and their complex ecological interactions, which in turn, is important for the maintenance of pests and invasive species.

After graduation, Martinez will begin a post-doctoral position studying insect symbioses at The University of Mainz in Germany, with the intent to continue his research around insects, microbes, and their interactions.