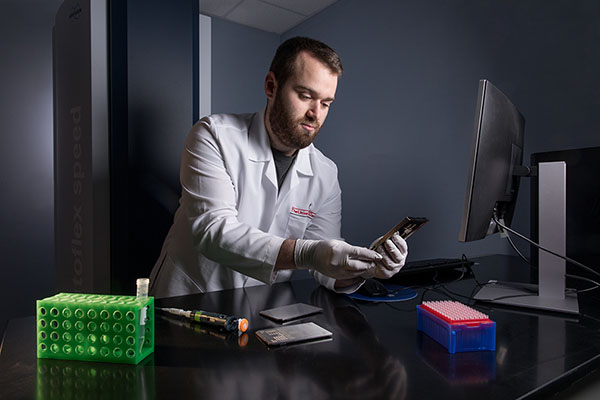 Unlike single-membrane Gram-positive bacteria which are susceptible to antibiotics, double-membraned Gram-negative bacteria are unaffected by many treatments due to the impermeability of the second, outer membrane.

“The cell membrane is a critical barrier for cells to protect themselves from the environment, including toxic compounds,” Powers explains.

“If [a drug] can’t get to its target inside the bacterial cell, it is useless.”

A. baumannii is a Gram-negative bacterial pathogen frequently implicated in hospital-acquired infections. It also is incredibly adept at becoming resistant to commonly used antibiotics.

The increasing rates of antibiotic resistance are particularly dangerous because, as Powers points out, it is leading  many companies to stop research and development into new antibiotics.

“We are currently in an antibiotic resistance crisis,” says Powers. “More and more bacterial pathogens are becoming resistant to most if not all antibiotics currently available for clinical use.”

Powers is confident that his research into Gram-negative cell walls can provide much-needed information to enhance effective drug delivery into these drug-resistant bacteria.

Advised by Dr. M. Stephen Trent, Powers recently completed a study published in the Proceedings of the National Academy of Sciences (PNAS) to understand how A. baumannii can survive and modify its membrane when it lacks lipid A, a typically essential component of the outer membrane.

To do this, Powers used an evolution experiment which involved continually passaging bacteria that lack lipid A.

Over time, the growth fitness of these bacteria significantly improved. He was then able to use genomic sequencing to figure out what had changed.

“We learned that two sets of proteins involved in membrane maintenance were detrimental in the absence of this lipid, and that these contributed to the resistance levels against certain antibiotics.”

“Depending on what we discover, [this research] could lead to therapeutic or applied technology that would never have been possible prior.”

After graduation, Powers intends to continue his research in an academic position.

“I truly love academia and so my intent is to continue the academic path after graduation.”

“My goal is to become a professor and run my own research program. Although I love doing bench work, what excites me about science is asking questions and thinking creatively about biology. Running my own lab would give me the opportunity to do that, while also mentoring and raising the next generation of scientists.”