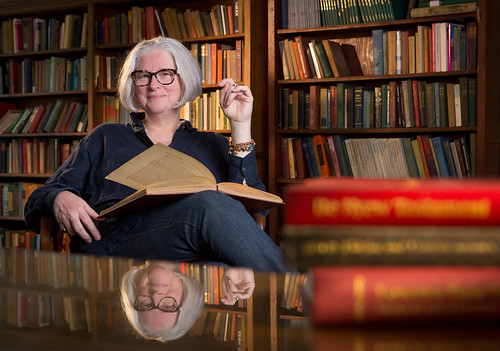 Before Europeans came to the New World, about 165 indigenous languages were spoken in North America. It is now estimated that only eight have over 10,000 speakers.

Perhaps unsurprisingly, this situation is typical across the globe as so-called “killer” languages (high-prestige languages such as English, Spanish, Portuguese, Russian, French, and Mandarin) push out minority and indigenous languages.

Kim Waters, a Ph.D. student in the Linguistics Program, has devoted her doctoral studies to recording and preserving one of these indigenous languages – the language and oral traditions of the Sapelo Island Geechees.

The Gullah-Geechee are descendants of enslaved people originally from West Africa, many from what is now Sierra Leone.

“People from this area (modern-day Sierra Leone) were particularly sought-after because of their more than 5,000 years of experience cultivating rice and possession of hydro-engineering knowledge necessary to control the flow of tidal waters.”

Currently there are about 50 Geechee people in the community of Hog Hammock on Sapelo Island, seven miles off the coast of South Georgia.

For her dissertation research, Waters plans to make the first high-definition digital recordings of the Gullah-Geechee language for acoustic analysis.

Few recordings of the Gullah-Geechee language exist. Dr. Lorenzo Dow Turner made the first on wax cylinders in 1932; the Library of Congress commissioned another set on vinyl in 1949.

“Turner was the first to recognize the link between West African languages and Gullah-Geechee. His research finally dispelled the misconception that Gullah-Geechee is just “broken English”. It is in fact, a creole, similar to Jamaican Patois and Cajun French”, Waters explains.

“Perhaps the main thing I hope to accomplish with my dissertation research is to document the sounds of Sapelo’s language at this point in the 21 century.” She plans to make these recordings available to members of the community on Sapelo so that future generations can hear the sounds of their ancestors’ voices.

“Languages are alive and constantly changing; if children are not taught their heritage language at home as a first language,” she stresses, “then with each funeral of an elder, a little bit of a community’s history and language dies.”

The work to document, preserve, and revitalize minority languages is critical. Within the next 100 years, some linguists estimate that as many as 3,000 of the world’s 6,900 languages will become extinct.

“Language death may not seem like as big a deal as global warming or a destabilized Middle East,” Waters states, “but linguist David Harrison writes compellingly of how, with the death of each language, significant knowledge about the planet dies; knowledge of eco-systems, flora and fauna, migration and weather patterns, crafts and hunting practices, and herbal medicines and healing practices.”

“It is very much my aspiration to continue in this tradition of language documentation. Language carries the sum of human knowledge and when one culture’s knowledge becomes extinct, we are all poorer for it.”