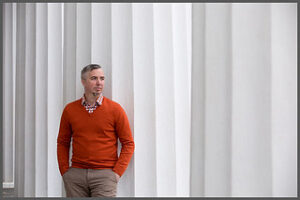 A doctoral candidate in the Romance Languages department, Martin Ward examines how literature is helping LGBTQ men in Chile and Argentina see themselves as men and valuable members in their society.

“Through these mediums,” Ward explains, “they are opening up discussions about masculinity and how its definitions can be multi-faceted.”

Often marginalized for their sexuality and gender identification, LGBTQ men in Chile and Argentina are challenging the notion that there is one strict way for men to express their identify.

“My research is not only analyzing these artistic productions of queer masculinity but also studies from sociology, psychology, anthropology, and other academic fields that use various methods to gather information about men in Chile and Argentina.”

“These studies seek to find out how these men see themselves within their own society and their thoughts on the possibilities of moving past many of the marginalized stereotypes that can cripple their ability to live a normal life.”

Advised by Dr. Betina Kaplan, Ward’s research focuses on how the changing status of masculinity coincide with economic factors like the entrance of women into the workforce and the rise of liberation movements for women and the LGBTQ community.

He also considers the ideas from intersectionality studies that focus on how racism, gender, and class interact together to create different outcomes depending on one’s social class, race, or sex.

“The texts I study represent an alternative to patriarchal masculinity that was represented as the ideal for men in the Argentina and Chile during the dictatorship periods of the 20thcentury and after,” he explains.

A big theme that Ward explores within the LGBTQ community of the Southern Cone is that of visibility. He explains that this idea is especially important in places like Chile and Argentina where there were documented mass disappearances of people who were seen as political dissidents.

“Today, these modern gender and sexual dissidents are using the lessons of the past that staying silent is not a choice. They are using their voices to make themselves seen and heard as the push for equal recognitions and protections under the law moves forward. Both countries have seen an expansion of laws and protections recognizing and protecting the rights of their LGBTQ communities.”

In addition to his dissertation research, Ward was selected as one of nine participants to speak at the TEDxUGA Student Idea Showcase in 2017 and completed a Graduate Studies Certificate for Women’s Studies.

After graduation, Ward plans to travel to Argentina and Chile to continue his studies on the  writers and artists participating in this literary movement as they continue their work to gain more recognition and rights for their perspective communities.

“I hope my work will help disseminate the varied approaches that are trying to give a voice and visibility to the LGBTQ communities in Chile and Argentina.”