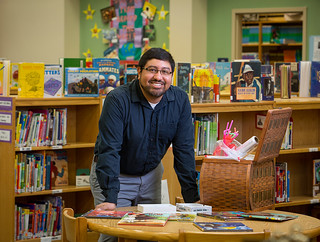 Interested in learning a second language? Research being conducted at UGA suggests that increased abilities in your native language better equip you to acquire an additional language.

But the cognitive benefits associated with language proficiency are only seen in those who have a high level of proficiency in both languages.

“Nevertheless,” Will Mira, a doctoral student in Educational Psychology, points out that, “language diversity in the United States is at risk due to assimilationist ideologies and the push for monolingual education.”

Mira, a child of immigrants from El Salvador, understands first hand the challenge of maintaining proficiency in his first language, let alone advancing it.

“In fact,” Mira explains, “a 10-year study with 5,000 participants found that only 27 percent of second generation immigrants remained fluent bilinguals – supporting the idea that most immigrants will lose their heritage language within three generations.”

Upon learning this, Mira knew he wanted to do something to help preserve this valuable, disappearing resource.

Mira’s dissertation research focuses on filling this gap through the development and pilot validation of a Spanish Language Assessment Inventory (SLAI), designed for elementary-age English-language learners to assess proficiency in each of the four modes of language fluency: reading, writing, speaking, and listening.

“My instrument measures each of these four modes of language fluency. The reading and listening sections will involve the use of original Spanish language short stories, which respondents will both read and listen to, and subsequently answer questions regarding the story. The speaking and writing sections involve the respondents telling and writing, respectively, their own version of the story they see while viewing wordless picture books,” Mira explains.

As a volunteer at the Center for Latino Achievement and Success in Education Tutoring and Mentoring (CLASE T&M) program, Mira has a wealth of experience working with third to fifth grade Latino English-language learners – most of whom spoke Spanish at home but did not receive any support in maintaining their heritage language at school.

The CLASE T&M program is a two-day-a-week after school enrichment program targeting third- to fifth-grade English-language learners at Oglethorpe Avenue Elementary School in Athens, Georgia. Dr. Pedro Portes, Mira’s major professor, is the Executive Director of the CLASE research center, which is housed within the College of Education.

“Working with these students I could see that they had an amazing skill that was in danger of stagnating or fading away altogether.”

“With that in mind, it is important that schools have an instrument to chart not only the development of English, but also Spanish for Latino English-language learners,” says Mira.

Mira plans to pilot and validate his instrument using a sample of high and low Spanish proficient Latino English-language learners from the CLASE T&M program. He hopes his instrument will provide a much-needed diagnostic tool for schools and enrichment programs that seek to better maintain and develop Spanish as a heritage language.

After graduation, Mira plans to pursue a career in academia.

“My ideal would be to obtain a position at a teaching focused college. I would be interested in teaching common topics in Education Psychology such as child development, cognition, and teaching and learning, and I would also like to teach courses structured specifically around Latino Education issues. I plan to continue engaging in research around improving educational outcomes for Latino English-language learners in the United States.”